Soundtrack of a life

Arlen Young lives up to his name. He’s a young 81. He and his wife live in Hollywood on the Bus 75 line. It goes right by their house – a modest dwelling that has been their domicile since the Kennedy administration. I ask what they paid. He grins and leans in, “$11,950. It’s now worth almost 500 grand,” he says, slightly embarrassed.

“Back when we moved in we were the young ones in the neighborhood – now we’re the old fogies. Lots of new families with kids have moved in. It’s nice. But a lot of our old friends and neighbors are gone.”

“We’ll stay until we have to leave. My daughter wants us to move into her basement but my wife wants to stay here. It’s our ace in the hole I guess.” What changes has he seen along the line? “There’s a bunch more traffic now. Sometimes takes me five minutes to back out my trailer.”

Arlen hears the 75 pass by every day, every night. It’s been part of the soundtrack of his life for over half a century. A good record indeed.

Javon has been driving the 75 for one year. She likes the route and wide range of riders.

“I get all sorts of people. All ages, every day is different. They bring on potted plants, snakes, spiders, other crazy stuff. You never know what you’ll see. Most riders are pretty much the same every day.” 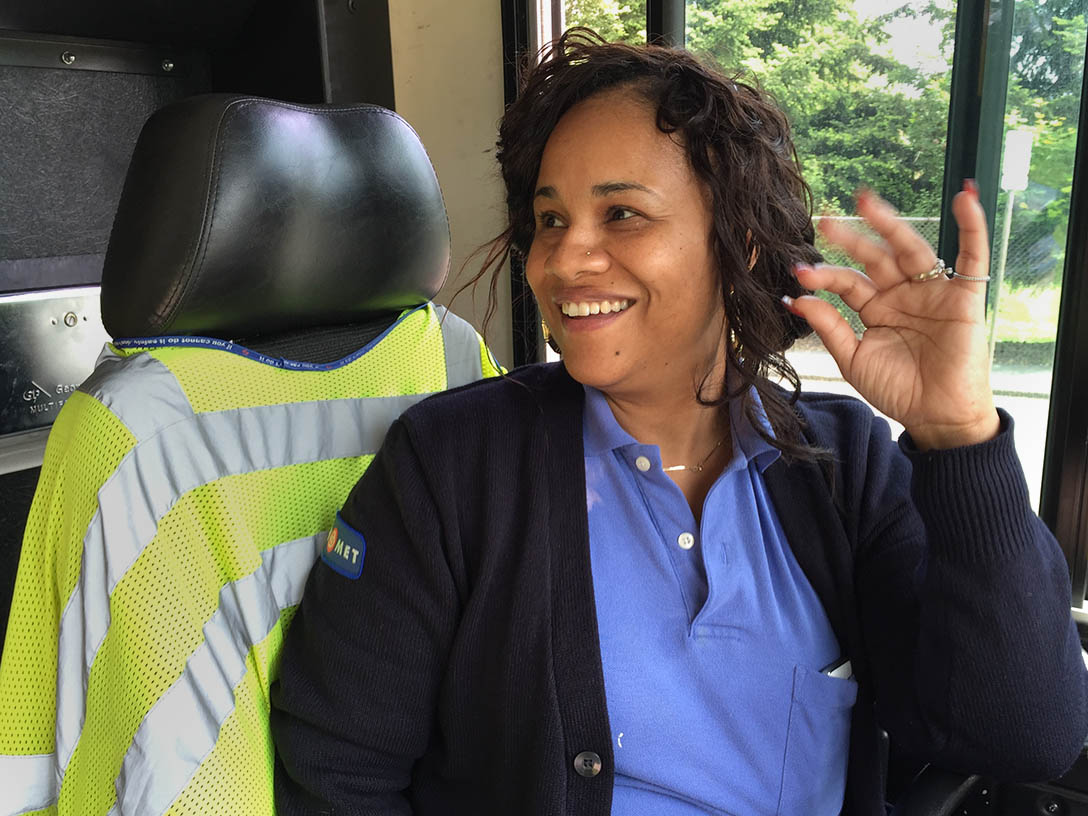 I ask what she enjoys most about driving. “It’s kind of like playing Tetris. Like a puzzle. You fit your bus into spaces. Stopping and starting, moving in and out of traffic, dodging cars, trucks, bike riders… the patterns repeat. You get into the flow, into a rhythm. You see things before they happen. I like that.”

Anything that surprises her? “I never knew Portland was so big! The 75 goes through so many little neighborhoods and towns.” 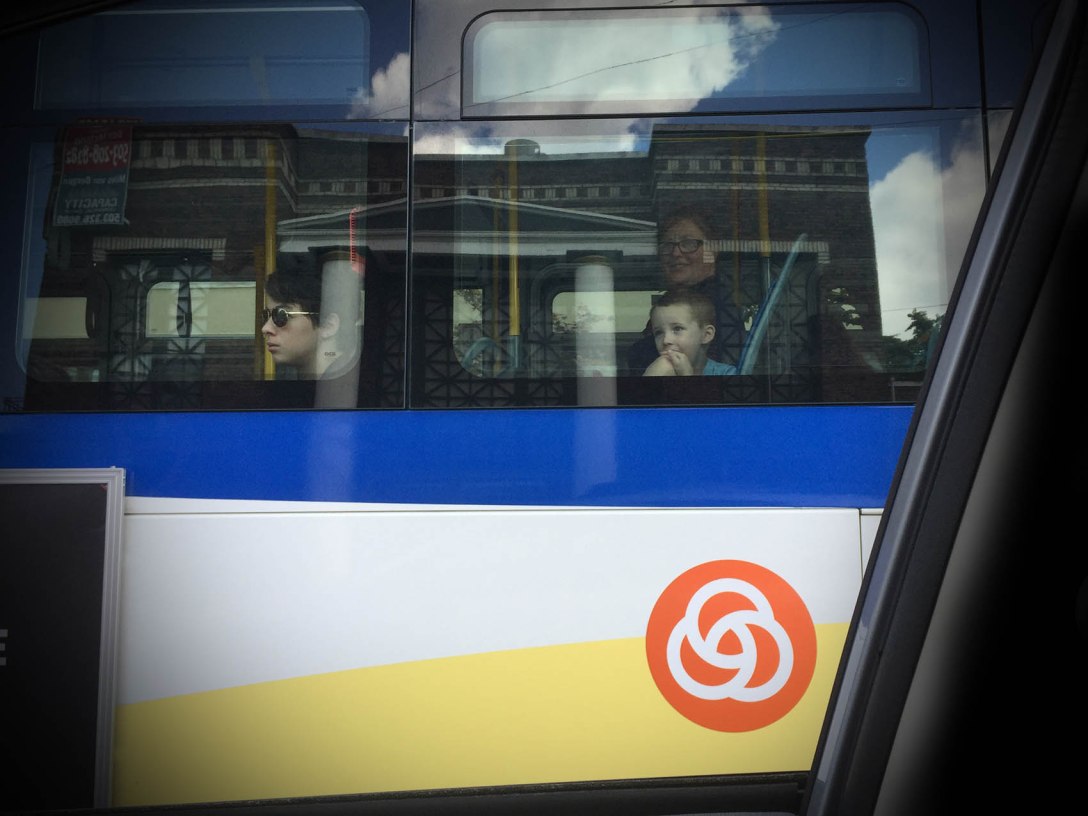 Seen near the bus stop in downtown Milwaukie: man in gray hat, white shirt and tie perched on folding chair and pointing his finger. He is a witness for Jehovah. Reading quietly on a tablet, he doesn’t hand out literature, proselytize or utter a peep until asked a question. 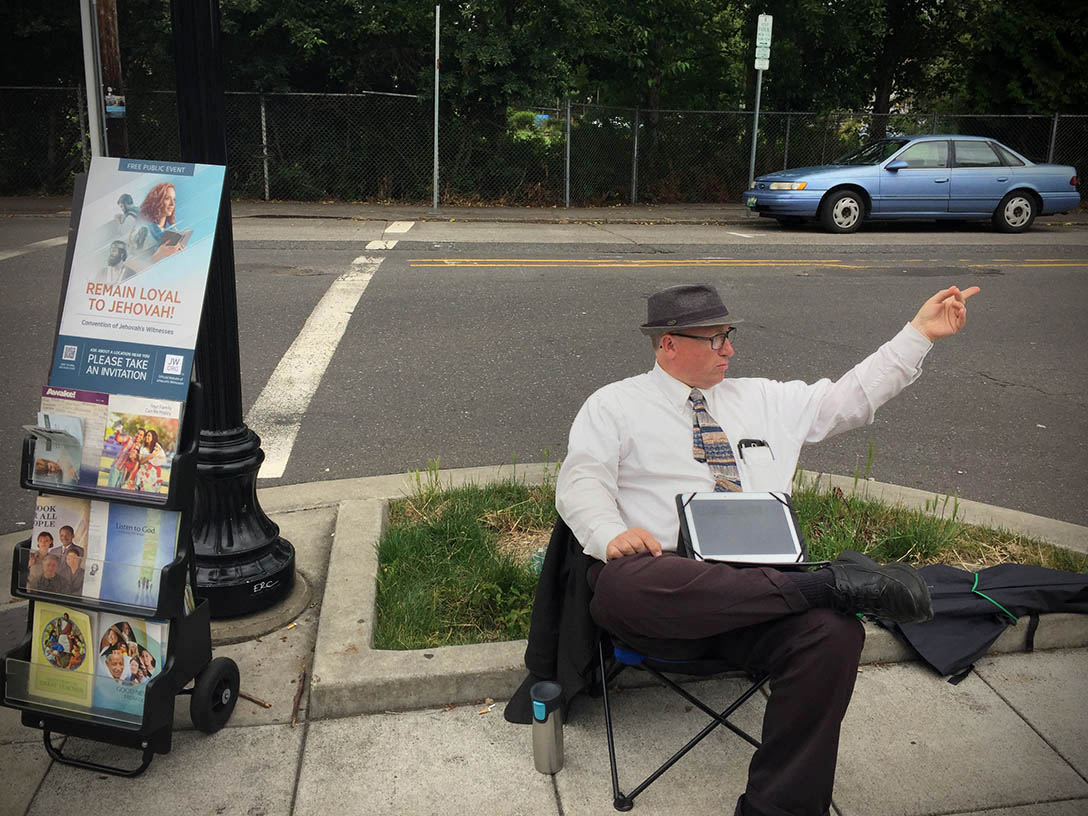 “One reason I’m here is to get out of the house. My wife is home sleeping. I don’t want to wake her so I head down here. I sit here most of the day. Read a lot. Bible passages mostly. And I play games.”

“I’ve been a witness for 20 years. As a kid I was a hardhead – had to do things my own way and made a bunch of mistakes. I finally decided I had to find something better in life. I checked out religion and this is what stuck. Jehovah’s Witness answered all my questions about life. Put me on the right path.”

Now he’s pointing the way to others, if they ask.

Donovan M. Smith sports long dreadlocks and a hat he designed for his business Ignorant Reflections. It’s a small fashion business Donovan launched three years ago. His Facebook page explains it as, “Provocative critical thinking via clothing. It’s a conversation with ourselves and the world around us.”

Donovan, a former staff reporter for The Skanner and The Portland Observer, grew up in the Cully neighborhood of NE Portland. He has witnessed the changes that have occurred in the past two decades and doesn’t like what he sees down the road. 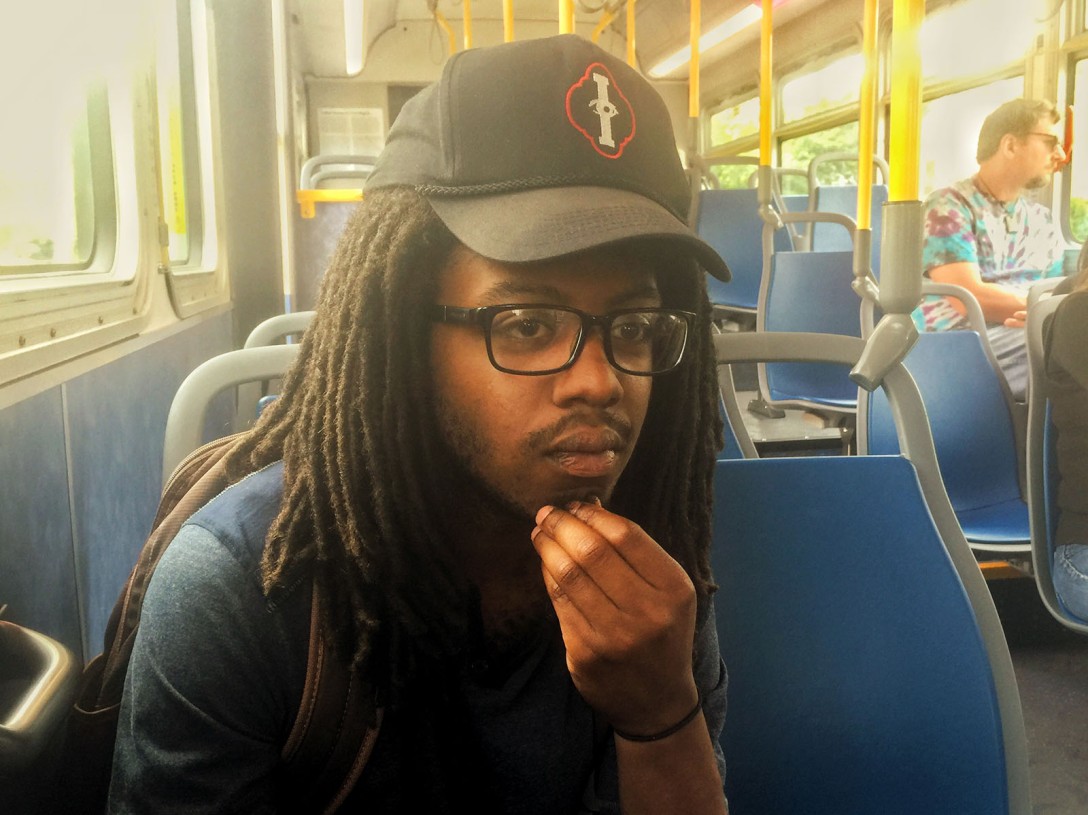 In a Portland Tribune story he talked about the hip popularity of the slogan Keep Portland Weird. He feels it is not inclusive of black people. “I realized it was a brand that got established in these neighborhoods,” he says. “That weirdness is what furthered people moving in. The weirdness didn’t include my grandmother, who has been living in North Portland for more than four decades.”

So, Donovan designed a shirt and hoodie that says, “GENTRIFICATION IS WEIRD”.  Portland mayor-elect Ted Wheeler wore it in a recent in-depth interview he did with Ignorant Reflections Media, a new online venture of Donovan’s. As Donovan says, he does not want to move. He wants to start a discussion. Provocative clothing is how he’s doing it.