At a time when it seems our nation is splitting at the seams, it serves us well to march together and honor those who have helped make us great for generations.

Every year, at the 11th hour on the 11th day of the 11th month, a flag is raised at a simple memorial at NE 48th and Sandy Blvd. It commemorates the official date and time World War I ended (Nov. 11, 1918) – better known as Veterans Day. And it’s where Portland’s only Veterans Day Parade culminates. Bus 75 passes right across the parade route on NE 42nd. 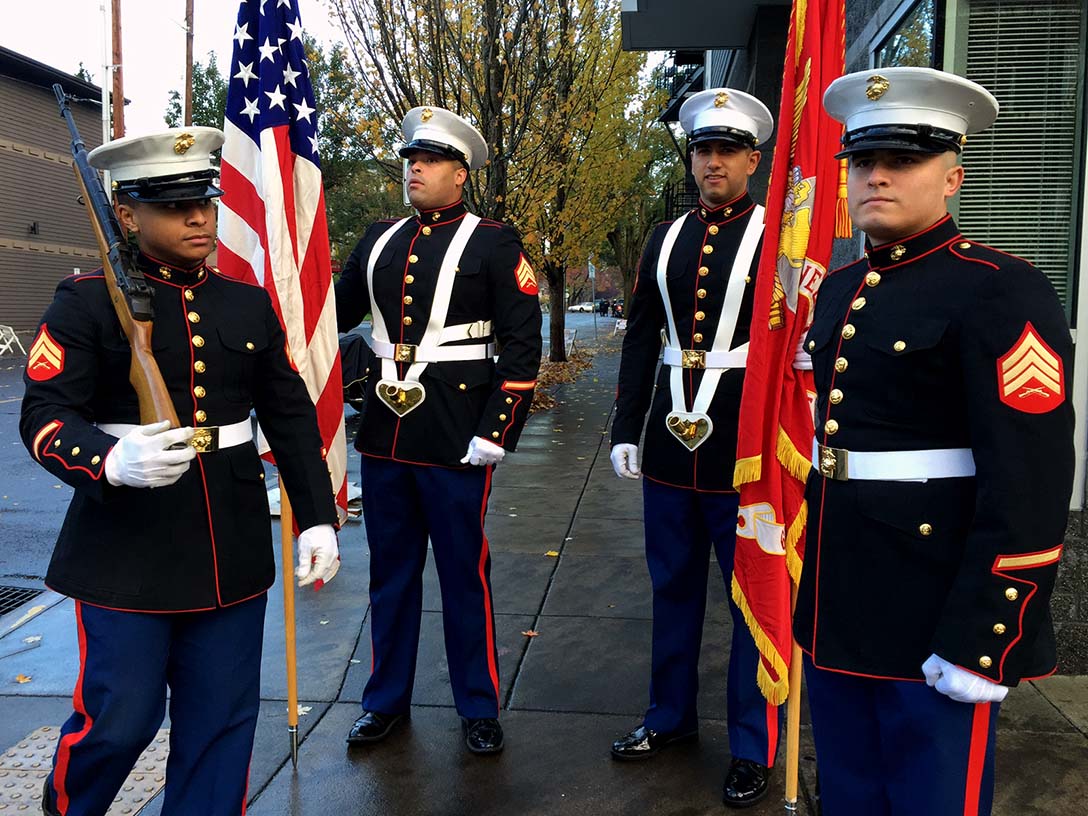 Portland’s Veterans Day Parade dates back to 1974, to a man named Vernon E. Ross, owner of Ross Hollywood Funeral Chapel. Ross bought a small piece of land in front of his chapel where he erected a flagpole and planter as a memorial site where the parade would end.

During the parade in 1983, Ross suffered a heart attack at the base of the very memorial he helped build. He succumbed that night. 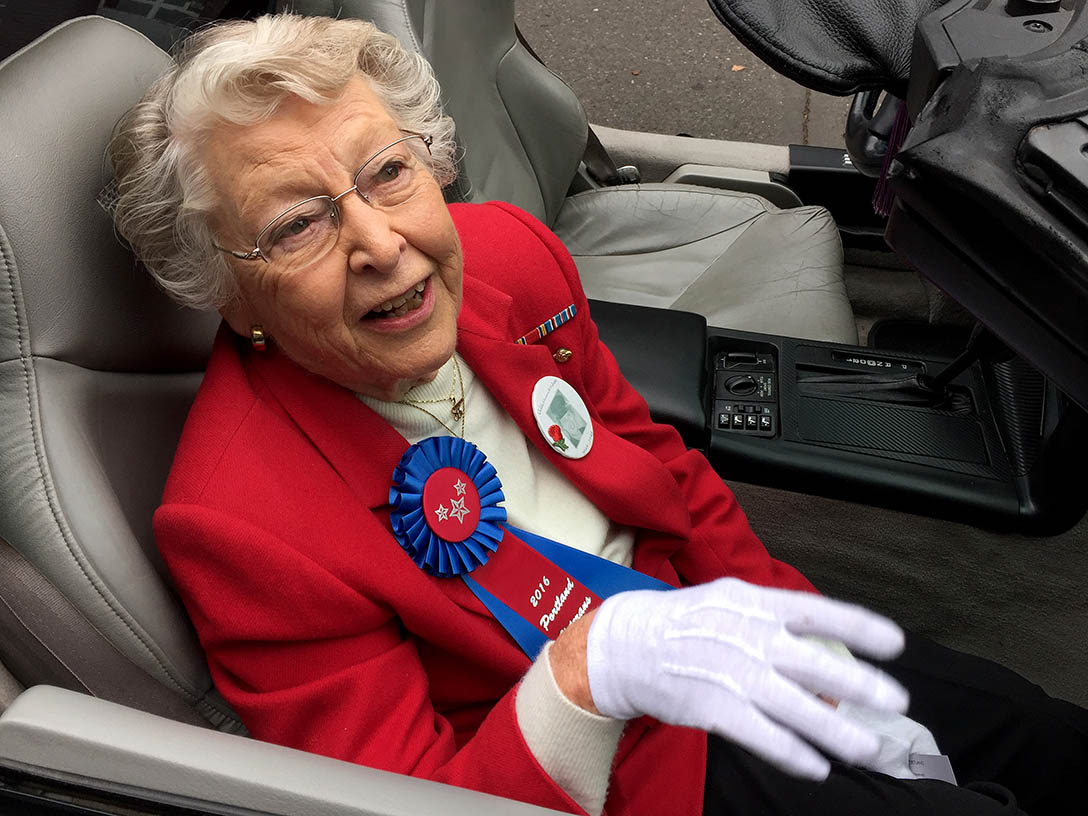 At this year’s parade the Grand Marshals are two 93-year old women marines, Golda Fabian and Hattie Kelley. I ask Golda, sitting in a Corvette convertible, for her take on where we are as a country.

“My mom used to say when I was little, this country is going to hell in a handbasket,” she laughs. “And now I’m saying it.” When thanked for her service she says, “Women have been fighting for our country for a long time. Some fought in the Revolutionary War dressed as men.” 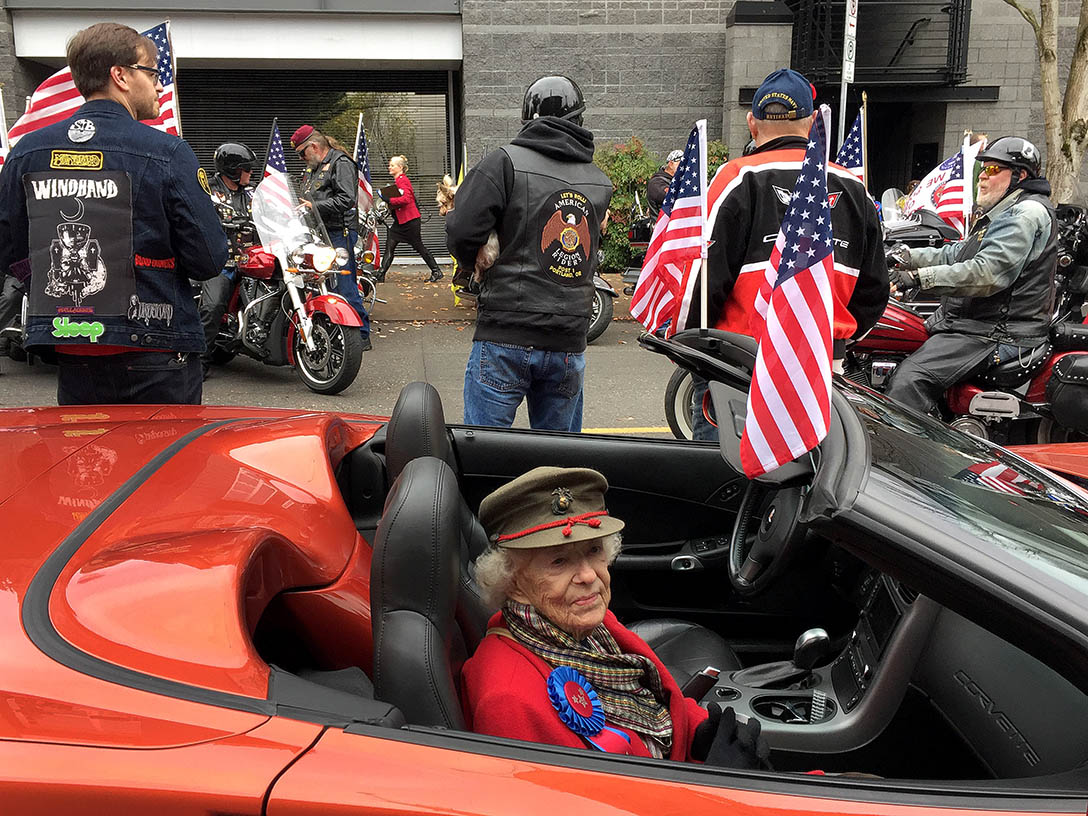 Guest of Honor Dolly Ruble, age 94, wears a slightly faded WWI cap. She speaks in a soft voice that rises as she gets going.

“We need to come together. Get along and quit fighting. Those young people who rioted last night – it’s okay to protest and be angry but not to riot and break windows. You have to accept it and move on.” 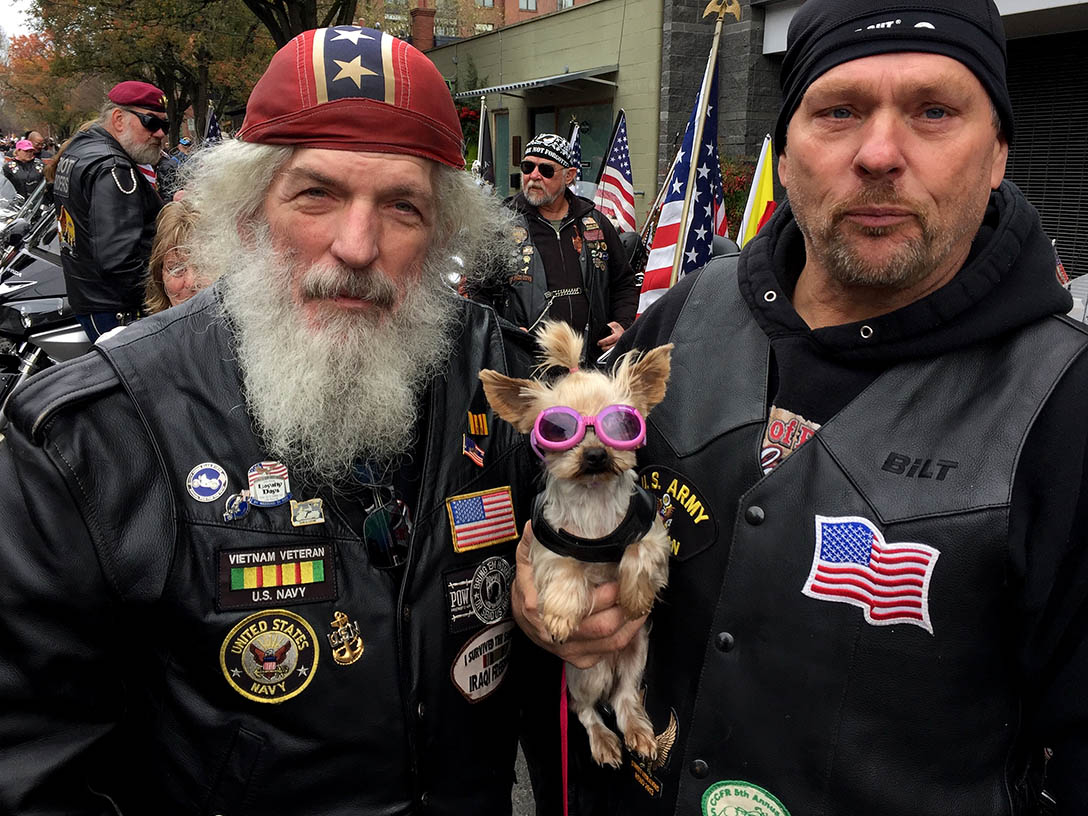 Nearby, bikers in leathers and beards talk quietly by their cycles. They’re with American Legion Riders Post 1. “We do it to support the vets,” one man says, “to build awareness and get more help – for guys like us.” His buddy is a Navy vet who served in two wars. 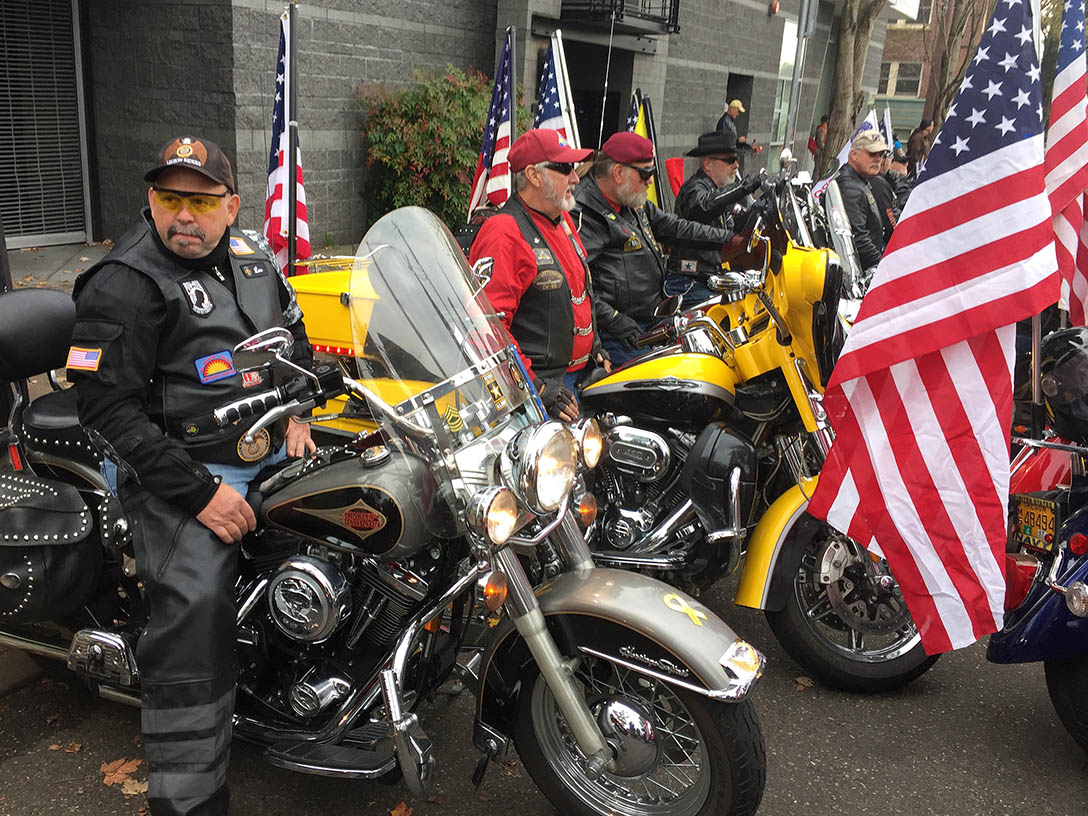 They hope the parade keeps going. They’ve heard it needs financial help and wonder why it’s not a bigger event. The call goes out to mount up. Engines are kicked into gear and crowd energy revs. 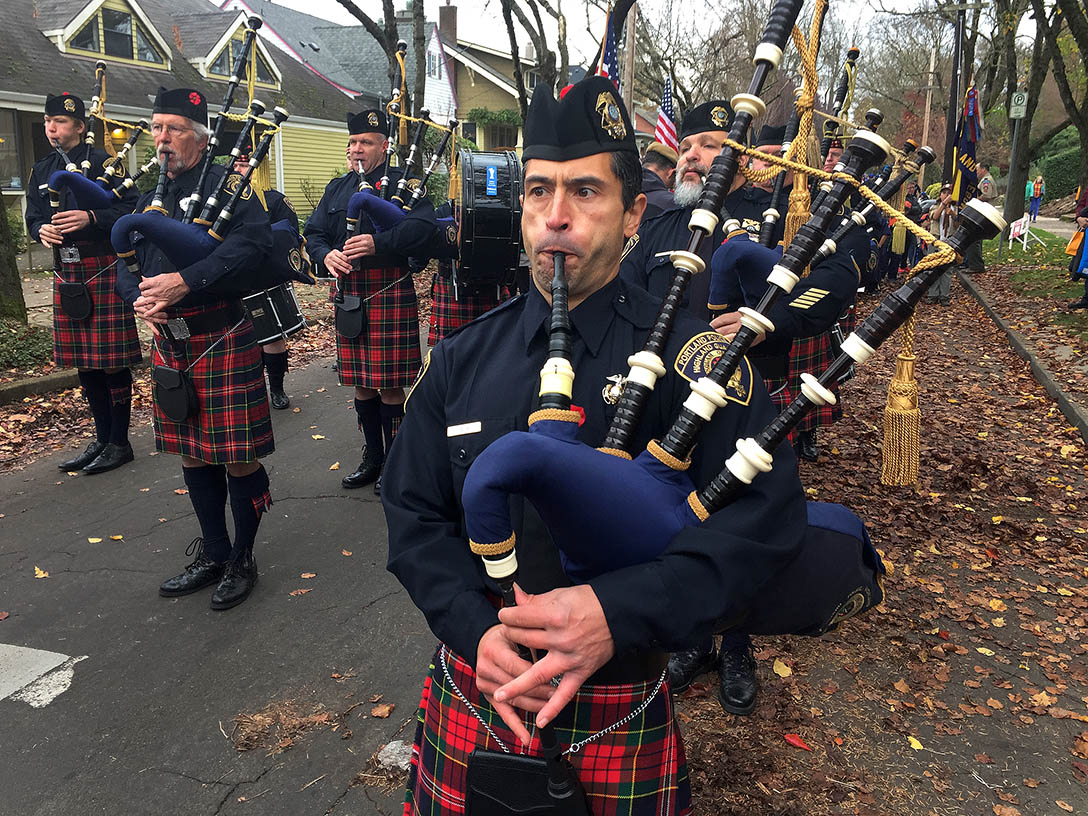 All ages march and all ages watch. Military groups follow each other, along with marching bands, scout troops, baton twirlers, a bagpipe battalion, candy tossers, and giddy kids. 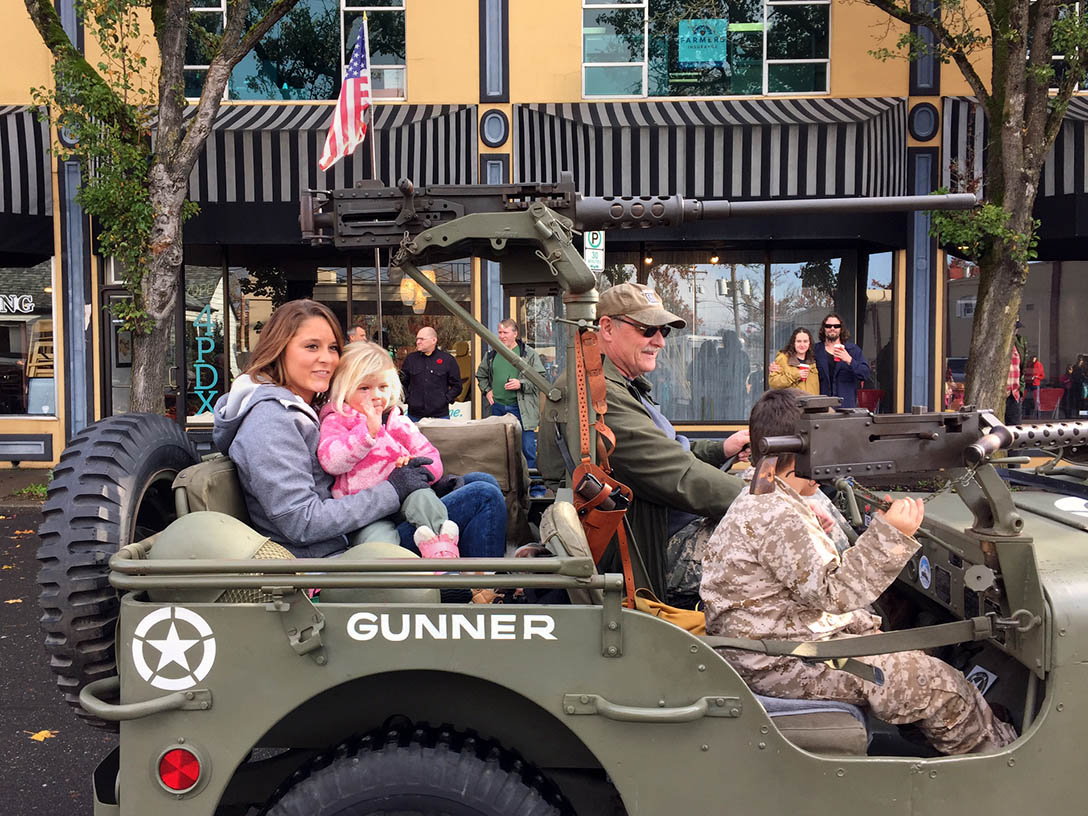 It’s poignant and heart-wrenching, coming just three days after the cataclysmic election that shook our nation to the core. 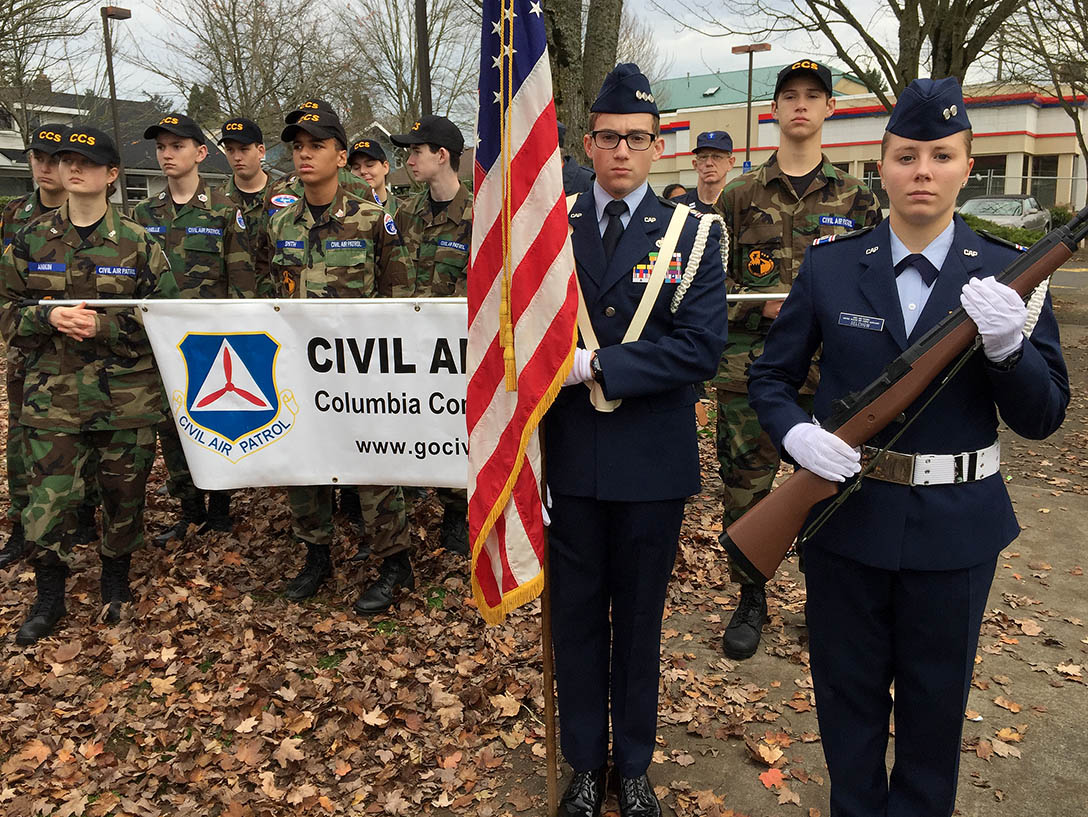 After the flag-raising and speeches from dignitaries, the Beat Goes On Band gently plays “America the Beautiful.” It’s poignant and heart-wrenching, coming just three days after the cataclysmic election that shook our nation to the core. 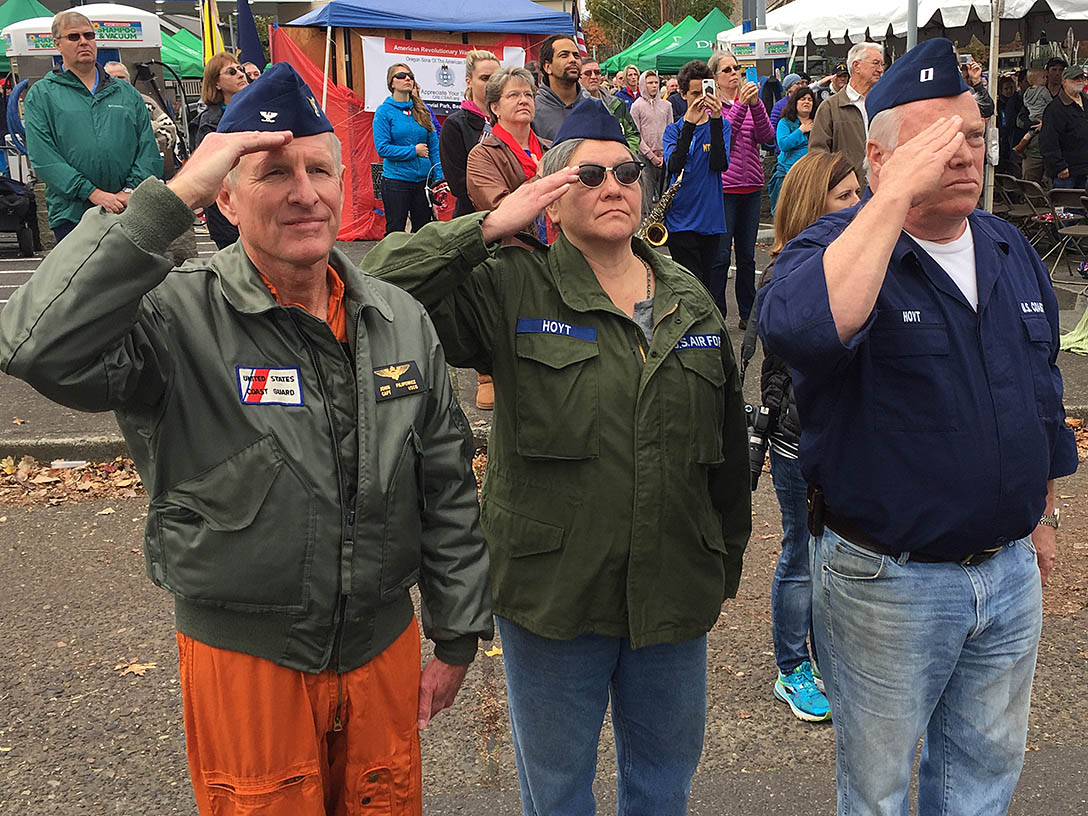 It’s fitting that it’s followed by a Grant High trumpeter who pours out a mournful “Taps”. Tears are summoned. 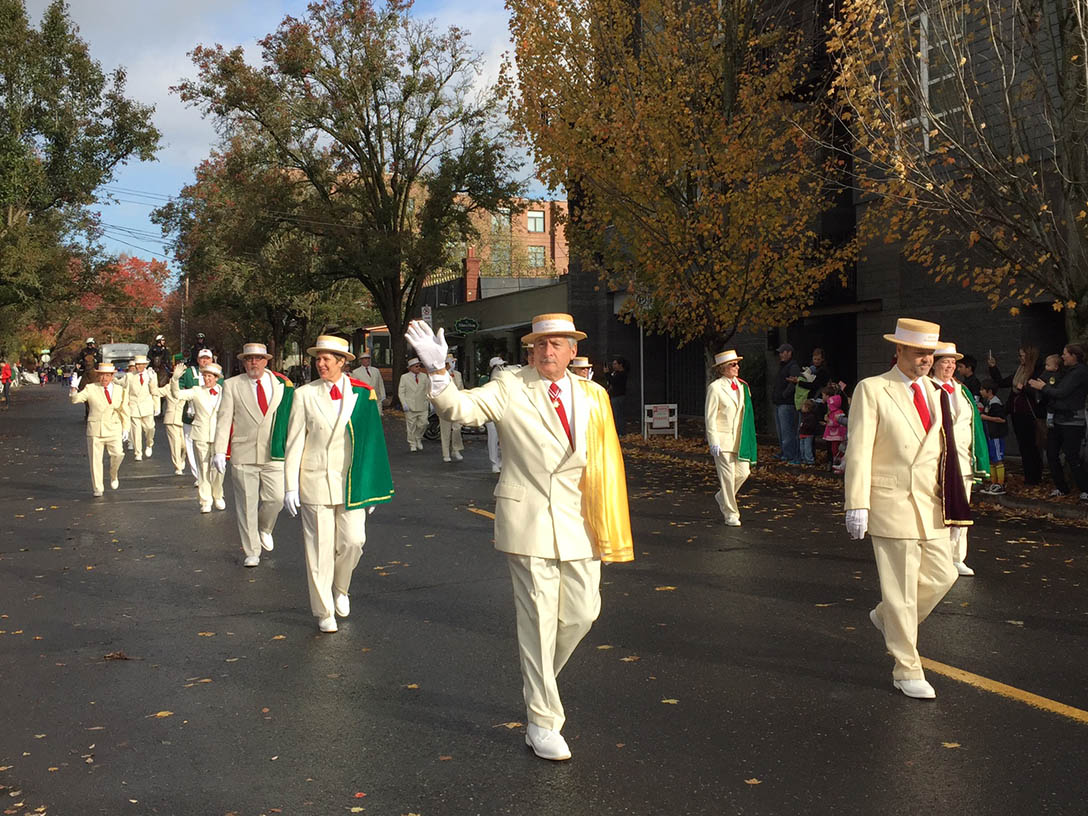