There’s a line to get in. It’s not long but it’s lively. Everyone is excited for the doors to open.

It’s like this every Sunday evening at six o’clock when NWA Blue Collar Wrestling takes the stage at the Eagle’s Lodge on North Lombard. Bus 75 goes right by, within shouting distance.

For $10 you can sit a chair’s throw away from the ring. For $12 you get front row. It’s performance art of a more physical kind. A combustive mixture of wrestling, gymnastics, theatrics and flying insults.

Tonight, money is being raised for Darkness, a wrestler who broke his leg in a match two months ago.

In between matches, kids as well as adults climb into the ring for the costume contest. One little waif wears butterfly wings. One wonders what she thinks of these people flinging themselves around the ring.

In wrestling, the story is everything. Opponents need a grudge or resentment or anger issue or family problem (Cain vs Abel) that must be settled in the ring. It has to incite rage and draw people back for each ensuing episode.

“It’s real, not fake,” says one fan, dead serious. “And you can yell at the wrestlers and they can hear you. And they yell back. Most big events that doesn’t happen.”

Everyone stands for the flag as our nation’s anthem reverberates through the auditorium. Then the action starts. Halfway into the first match a wrestler drops his opponent with a clothesline. Then climbs the rope, jumps high and does a back flip, landing on his prostrate foe. My jaw drops. I have newfound respect for these Sunday gladiators, who train and practice each week to get their moves down.

By the end I was taking part, pointing and yelling along with everyone else. Gotta admit it felt great.

Tommy takes a roundhouse to the face and tumbles through the ropes onto the floor. An older man and woman sitting close by stand and let him have it. The woman has torn the bottom off her popcorn cup, which she uses as a megaphone. “You suck, Tommy! You suck!” she reiterates over and over.

Behind the curtain, bitter foes in the ring hang out as friends and talk about their matches. Tex, a longtime wrestler and event manager, is on stage almost every week. His story has just taken a turn. “I went bad tonight. I haven’t been bad in ten years,” he says, grinning.

One of the losing wrestlers won’t leave. He struts around outside the ring and then jumps back in. He comes up behind the ref and clocks him, knocking him to the canvas, out cold.  He then takes down his opponent and raises the championship belt. The crowd boos and stomps. I among them.

When I first saw Blue Collar Wrestling, I smugly laughed at the crowd, the wrestlers and the whole cartoonish spectacle. By the end I was taking part, pointing and yelling along with everyone else. Gotta admit it felt great. 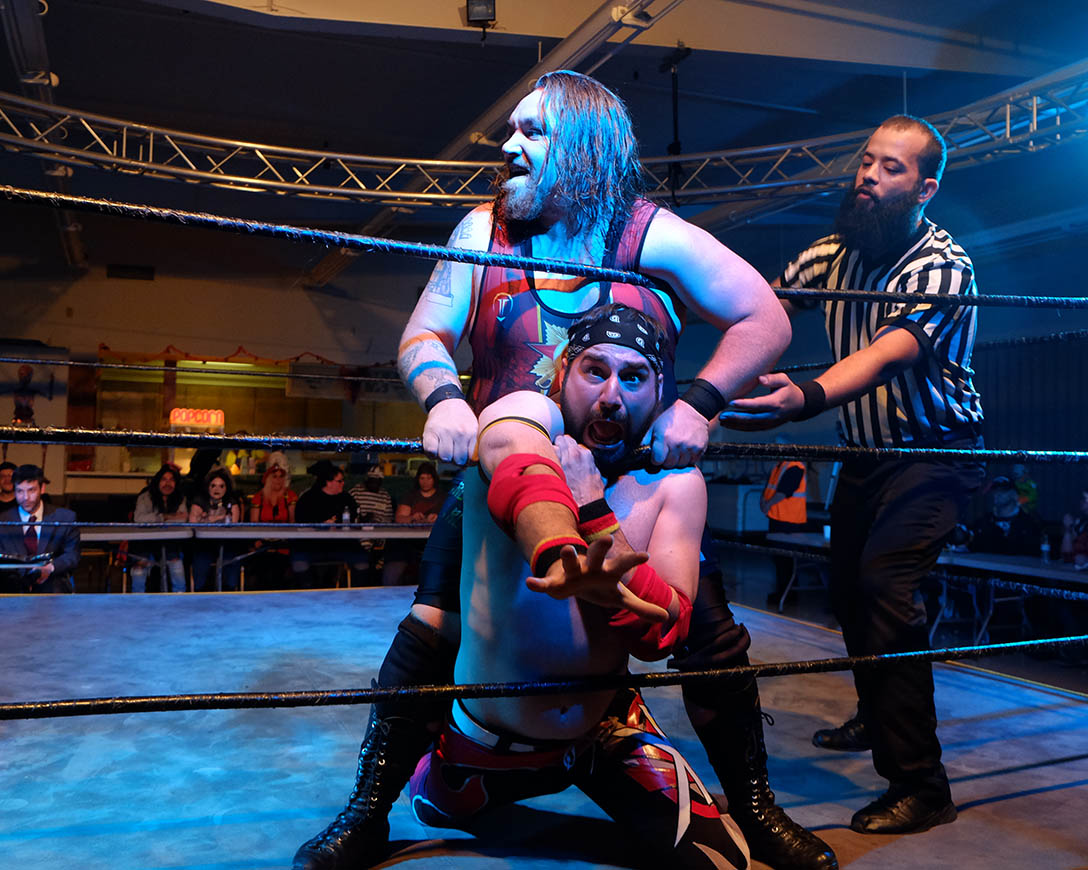